Part of a large family, young Dino could only speak Italian until he started school and said, later in life, that his “…English was never that good, either.” 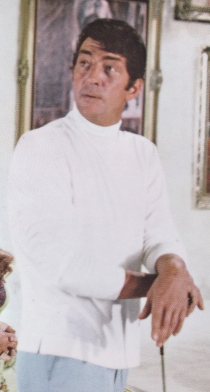 Guy was a successful barber and Angelina had a small sewing business, so they were never too short of money. Dino joined the local scout troop when he was twelve but, being somewhat against the idea of learning in general, he never took to school much, often preferring to be out playing with his friends. As he grew up through his teenage years, he developed a preference for singing, something which his friends never appreciated, often saying that he had an appalling voice. But his own perseverance saw him become professional at aged 26.

He did the rounds in various clubs and gained experience in not only living out of a suitcase but earning below that which he was used to. These were lean years for the young Dino Martini, as he called himself then.

It was at one such club that he found himself billed with a mime artiste called Jerry Lewis. This gangly Jewish comedian was struggling on the circuits as much as Dino and one fortuitous day, Jerry suggested to Dino that they pool their talents and become a double act: Martin and Lewis.

Following the partnership’s break-up after 10 years, Jerry moved more into production and direction while Dean continued his solo music career and found movie and television stardom. His subsequent friendships with Frank Sinatra and Sammy Davis Jr became life-long – and legendary, to boot.

Dean was at the top of his game, remaining a highly successful personality throughout the 1960s, 1970s and the 1980s. Even after his death on Christmas Day 1995, he continues to be one of the world’s most popular entertainers, with his material found across many forms of media.

Back to ‘Who We Are’